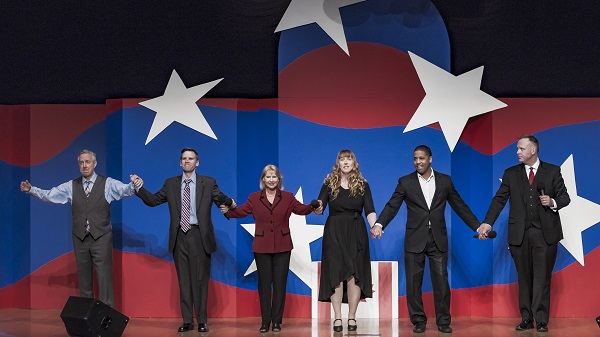 Mastery of Musical Political Satire Perennial Rialto fan favorites, the Capitol Steps have been putting the “mock” in Democracy for over 35 years. The Capitol Steps return to the Rialto with fresh new material straight from the current headlines. They’ve been featured on NBC, CBS, ABC and PBS, and their won Politics Takes a Holiday Started by a group of Senate staffers, the Capitol Steps still operates under their founding directive: all points on the political spectrum are welcomed and dutifully skewered. Known for their equal opportunity lampooning, the Steps always deliver an evening of “unpresidented” musical political satire straight from the current headlines. Everyone’s politics gets spoofed and everybody leaves laughing! "The Capitol Steps make it easier to leave public life." — Former President George H. W. Bush
This is a Rialto Series performance.